Have you ever been in the process of doing something, a simple task, and all of sudden something happens that surprises you or all of sudden a “message” comes to your mind, as if God was speaking directly to you? I had something like that happen today with something as simple as a bouquet of flowers I received for Valentine’s from my husband.

My husband was at Costco last week before Valentine’s Day and they had some beautiful flower arrangements for sale. He decided he wanted to get me one. He found this huge arrangement that included long stem roses, lilies, and some wildflowers. I had been out-of-town for the day, so when I arrived home, I found the flowers on the kitchen island. What a wonderful surprise … I love flowers! They just make me smile. I thanked my husband so much for the beautiful roses. Then he said to me that there were some other flowers in the vase as well. I said, “yea, I noticed the pretty purple wildflowers.” He said to me that there were also lilies in there. I was like “really?” I did not notice the lilies at all. I had to go back down and check it out. Sure enough, there were lilies right in the middle of the bunch of flowers. They seemed to be hidden by the roses, with their thorns  and leaves, and the wild sprigs of purple flowers and leafy green sprigs. The lilies were not open, not a single one, they were all closed up. My husband assured me, they will open up later, to give them time.

Three days later, I was noticing some of the leaves were dead and a couple of the roses were a little droopy. The lilies still weren’t open. I remember saying to myself, “I need to change the water and get rid of some of the dead leaves.” So after church today, I was eating lunch and I once again looked over to admire the beautiful bouquet. I decided I was going to spruce them up after lunch.

I approached this simple task like I normally would and I was expecting I’d just trim everything up, change the water and be done; and that would be that. I began by taking the flowers and the sprigs out of the vase, one by one, carefully laying them across the counter. Except for the two bunches of lilies, I stood them up in another vase. I was thinking they might need their own vase instead of going back in with the roses. Once everything was out of the vase, I cleaned it out and filled it with fresh water. Next, one by one, I trimmed the ends of the rose stems and placed them back in the big vase. Then, I chose a few of the tall green sprigs to add color to the vase. I pulled off all the dead leaves and decided not to put the wildflowers back in. I figured this would allow the roses to breathe a little and have more room. Then I looked over at the lilies. They seemed small in that vase by themselves. I looked back at the roses and saw that there was still some space in the middle, so I put the lilies back in the big vase with the roses. At the time, the lilies were still closed. Once done, I wiped off the outside of the vase and proceeded to move it over to the kitchen island.

Then I noticed it … one of the lilies was wide open and it was right in front of my face. The pink was so pretty and bright. I said “Oh, wow! How did that happen?” It literally happened right in front of me but I didn’t see it open. It was so cool! I immediately was excited and began to think … the wildflowers and dead sprigs were choking out these beautiful flowers. The roses were starting to wilt and the lilies weren’t opening because the other unnecessary greenery or extra greenery was stealing their water, their air, their space … they were choked. They couldn’t blossom; they couldn’t shine; and they couldn’t grow. 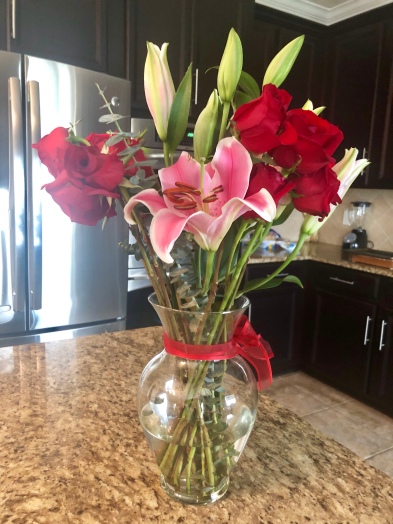 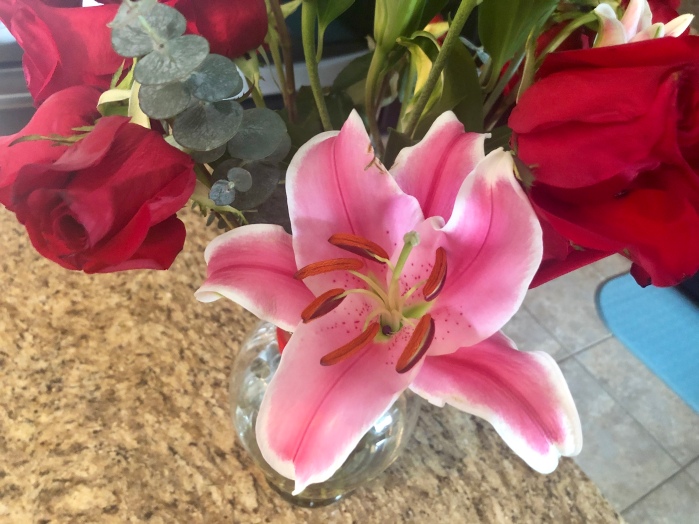 I’m standing there in my kitchen in awe of this lily. I know it seems silly, but I felt as if God was talking to me in that moment. The message was this: sometimes we have too much stuff in our lives. We fill our lives with all these activities, social media, tv, work, and more. We might even fill our lives with worry or even doing good things, just too much. We don’t make room for the things that really matter. We don’t have time for God, our families, our friends, our neighbors or others that need us because we fill our time up with things that don’t really matter or with just too many things. I’m actually coming to tears right now because I am feeling convicted, I know I am guilty of this sometimes. It amazes me how easy it is to get caught up in so many things and all those things literally choke us. It’s as if we are surrounded by weeds that keep growing and we can’t even see what’s  right in front of us.

In this analogy, the weeds are not necessarily bad, sometimes its good things that blind us. We just pile on too many things and we can’t see or we can’t breathe. I thought about the bouquet of flowers and how in a way, it looked sort of “busy”, too much was going on. Remember, I didn’t even notice the lilies at first because of all the other stuff in the vase. Sometimes the “weeds” in life that choke people, is the busyness of life. Sometimes the busyness causes us to be tired, irritable and impatient or even worse. It’s as if the good is being choked out (the lilies not blooming) and the bad things sprout (dead leaves and sprigs, wilted roses). Also, we might totally miss out on something beautiful or wonderful in life because we are blinded by all that other stuff.

What this leads me to ask, what in my life is choking me? What do I need to remove to make more time for those that I love? What do I need to stop doing and start doing to allow myself to blossom and grow? Does any of this resonate with you? Maybe you are reading this and think I’m crazy. Maybe you don’t know Jesus. I get it, I was once there. I do know one thing for sure, I know Jesus now and I wouldn’t want to live this life without Him. I am so thankful for the wisdom I receive from the Holy Spirit and God’s Word. My prayer is that maybe this will touch someone’s heart, that someone needed to read this for a reason and that is why I’m literally sitting here typing my true thoughts down as they come to my mind. I’m going to leave a few scriptures below that God laid on my heart to share with you. Until next time … love you all!  ~Kristina~

Mark 4:19 “but the worries of this life, the deceitfulness of wealth and the desires for other things come in and choke the word, making it unfruitful.” NIV

Matthew 13:7 “And some fell among thorns; and the thorns sprung up, and choked them:” KJV (some – seeds)

John 15:1-2 “I am the true vine, and my Father is the gardener. He cuts off every branch in me that bears no fruit, while every branch that does bear fruit he prunes so that will be even more fruitful.” (spoken by Jesus … read through vs. 17) NIV

1 John 2:17 “The world and its desires pass away, but whoever does the will of God lives forever.” NIV

Luke 12:27-28 “Look at the lilies and how they grow. They don’t work or make their clothing, yet Solomon in all his glory was not dressed as beautifully as they are. And if God cares so wonderfully for flowers that are here today and thrown in to the fire tomorrow, he will certainly care for you. Why do you have so little faith?” NLT

I’m Kristina, a Nature photographer and blogger who enjoys sharing my “Florida life" adventures revolving around my hobbies: crafting, photography, exploring, and more! My photos range from birds, wildlife, and flowers to sunsets, beach and river shots. I love being outside in nature and seeing all that God has created and sharing that with others. I am always describing nature as “free therapy” —a getaway, and place to reset my mind. You can read more about me on my website @enchantingfloridaphotography View all posts by myenchantingfloridalife

9 thoughts on “Do you have “weeds” in your life choking out or hiding your “beautiful flowers”?”